So the next few weeks are going to be go-go-go in our household. This is what’s lined up:

Of course through all this mayhem it might mean that I’m stretched for time to write this blog, so apologies in advance.

View from the summit 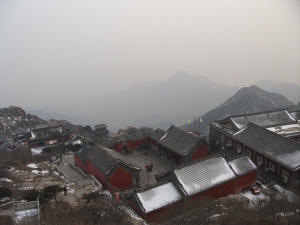 The summit of Mount Tai

I’ve heard the top of Mount Tai itself looks spectacular, if only it were possible to see clearly. As expected in these winter months, a thick fog was clinging tightly to the mountain and the pink sun was only vaguely visible until it descended into total obscurity behind clouds a fair margin above the horizon. In the end, we didn’t even notice that the sun had set. The summit of the mountain is not so much a peak as it is a very gently sloping, wide space filled with hotels and telephone masts. This is accompanied not by the sound of silence, but rather by speakers blasting out modern Chinese heart-wrenching power ballads, the most memorable of which was called “Mum, Don’t Cry” (妈妈你别哭 Māmā Nĭ Bié Kū). My personal highlight, though, was the “Terrace for Viewing the State of Lu”, where Confucius had supposedly stood. We were not pilgrims expressly following in his footsteps, but it was a strange feeling to stand in the very spot described in one of our first year Classical Chinese texts. Even if the view was simply looking into a thick cloud.

After we had sufficiently explored the summit of the mountain and had sat down briefly inside to thaw, the really exciting bit began. Night had well and truly fallen, and here we were, at the top of a 1,532 metre-tall mountain, without a hotel, faced with 6,293 steps down. Thankfully, one of our group had brought a handheld torch, and we eventually perfected the formation whereby one of us could shine the torch to allow all of us to place our feet carefully on each step. We were clambering down the main route up which the majority of tourists climb, and so we met a fair amount of puzzled faces questioning our reasoning for coming down at night. The path was wide and well made-up, but seemed never-ending. Shops and stalls passed by and the route snaked down the mountain, every step as sheepishly trodden as the last.

It was a good few hours until we reached a wide tarmacked bus stop. Being dark, we assumed that the bus services had stopped and continued to follow the stairway. It led us to another, considerably smaller and unpaved track which led us into a darker forest and definitely didn’t have the air of a main route. We were sure we hadn’t missed any large turnings. Confused but resigned to the absence of alternatives, we carried on and hoped that it would lead us back onto the main drag soon. This was certainly a hope which it didn’t really fulfil. We must have scrambled for at least three-quarters of an hour along a dusty track through the forest, one person wide, leading over large boulders and tree roots, in the pitch black of night, aided only by the weak light of our mobile phones. It would have been the perfect setting for a horror film. At one point, it directed us down what I’m sure was at least a 30% slope. It was definitely a case of putting your head down, focussing on your feet and not on what you could see of the distance, as what was ahead would just make you hope that there was a house round the corner.

Which there was! It was a real godsend that the path, at long last, led us back to the main steps. There we were welcomed with looks from Chinese people more disapproving and bewildered than ever before. How much further, we asked… another hour. It was ambitious to ever hope that we’d reach the end of the path so easily, so we carried on climbing down the steps. Legs feeling categorically like jelly, now.
Aside from the blip of the, let’s say, unofficial routing, the rest of the descent was not too bad. After such a long day of walking, my mind had been sapped of energy and I now struggle to have any distinct recollection from any time after our emergence from the shrubbery. The epic journey concluded when we found a taxi hanging around after just dropping off walkers climbing up the mountain. To our surprise it had only taken us three hours to come down (even with our slight detour), yet it still felt like we had spent longer coming down the mountain than we had spent going up. We rode back into the town, all resolutely sure that we had earned a huge McDonald’s. After getting back to the hostel, straight to bed. I don’t think I’ve ever fallen asleep so fast.

Again, it was nice to escape the crowds which, to our surprise, didn’t seem to be present on Mount Tai. I have heard that the mountain is a tourist magnet due to its historical significance, yet there was gladly no sign of that at this time of year. The summit might not have lived up to expectations due to the fog, yet the climb up Mount Tai presented simply stunning scenery, and the climb down provided one of those silly little stories which make you laugh later on. We may have done it better if we had heeded the Chinese naysayers and not done it the “wrong way round”, but I can still say that it was an enjoyable and fully worthwhile excursion.

Looking up the valley towards the summit of Mount Tai

Barely two weeks have passed since we ventured into the great outdoors of the Great Wall at Jinshanling, and already the rigours of Beijing urban life have been starting to grind again. I find that every day spent in this sprawling city of 19 million is increasingly leading me to crave fresh air and open spaces. Plenty of activities are in the pipeline for the very near future (including a visit from a group of seven friends from the UK and imminent visits to Shanghai, Suzhou, Nanjing and Huangshan), and thus our free time in the coming months will be at a premium. Faced with a single free weekend, and a startlingly long checklist of not-to-be-missed activities, we were overcome by a rush of carpe diem. Arguably the most sacred mountain in China can be easily reached by a two hour train journey from Beijing, so what were we doing wasting time in the city?

Mount Tai (泰山 Tàishān) stands in the eastern province of Shandong, looming over the city of Tai’an (泰安 Tài’ān) at 1,532 metres, and is a site that has been venerated throughout the course of Chinese history. The First Emperor proclaimed the unity of the Chinese states at the summit of the mountain in 219 BC, but it also seems that anyone who’s anyone has also done something important here. Mao Zedong and the Tang Dynasty poet Du Fu have visited, and even the big man himself, Confucius, once stood on Mount Tai and got all wax-lyrical about “considering the state of Lu small”. (I can’t vouch for him on this one though, thanks to the thick fog). Thanks to its central position in Chinese history, the mountain is regarded as a truly significant site, and hoards of people climb the mountain to attain the blessing of a hundred-year life, which is said to be bestowed upon all those who climb the mountain on foot.

We reached the city of Tai’an, nestled at the southern foot of the mountain, by fast train, as the city lies on the high-speed line between Beijing and Shanghai. These ‘G’-mark trains are spotlessly clean and race along at 300km/h, contrasting hugely to the regular, slow and dirty trains which trudge around China’s section of normal railway. Tai’an itself, as a city, is unremarkable. In Chinese terms, this means grey, filled with dreary tower blocks, and stretching in every direction for as far as the eye can see. We only used the city as a point to rest up, so there is little to comment on the city itself.

We soon found out that, according to curious Chinese people who forced themselves upon us in conversation, our trip was “very poorly planned”. Such conversations invariably consist of me starting up conversations with people on trains, with initial enthusiasm to practise my spoken Chinese, only to regret the over-bearing nature of the ensuing dialogue and trying to withdraw all traces of interest. In this case, a young woman on the train sat next to me and, after finding out that I am a student of Chinese, started to grill us on our plans (of course, this followed the ubiquitous ceremony of “Where are you from? Are you American?” – “No, I’m British” – “Where do you study?” – “At Peking University” – “Wow, do you find Chinese hard?” – “The writing and the tones are hard, yes” – “Do you like China?” – “Not anymore”. The last one was thought, not said). It transpires that Chinese people like to climb the mountain at midnight to be at the summit in time for sunrise, then climb down immediately afterwards; the lady on the train greatly disapproved of our plan to climb during the day, maybe stick around for sunset, then climb down in the evening.

We decided to ascend by the less-trodden route, which led up the back of the mountain through the Tianzhu Peak Scenic Area. After a little confusion about how to reach the launching point for this route, we commenced the slow and steady five-hour climb to the summit at around midday. The sun was out with the blue skies, yet the air was bracingly chilly. A wide ravine scarred its way up the steep mountain side, getting gradually thinner as it twisted its way past sheer cliff faces and forested slopes. Rivers once poured down this course, punctuated by waterfalls of varying height, now frozen over by the harsh winter. We were greeted by new cliffs and rocky promontories which became increasingly spectacular the further we progressed up the mountain. Every now and then, we came across temples with curious names such as “Hurrah at the mountain temple” (呼山庙 Hū Shān Miào) which provided fantastic vantage points up, across and down the valley. The whole route had concrete steps, only occasionally giving way to sheets of ice and snow. Five hours of climbing later, a sense of elation descended upon the group as we could peer down the dramatic slopes that we had just scaled and had reached the summit.